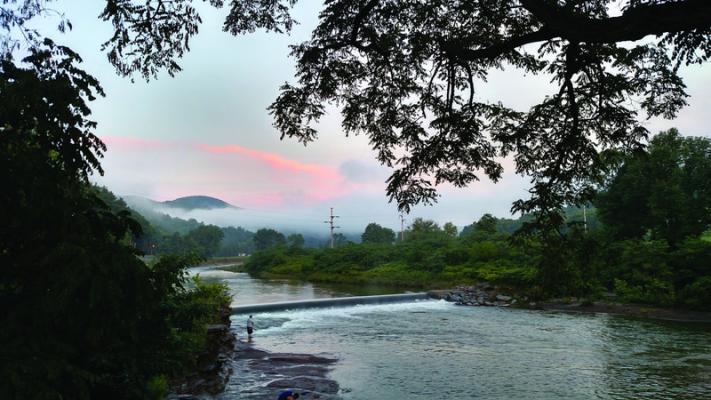 Pastoral beauty at sunset at the Barrier Dam in Prattsville.

PRATTSVILLE — Take note and enjoy the accompanying photo of the Prattsville Barrier Dam taken by Laurel Irwin Van Aken. The composition of it tells its own story. Get out there and check out our scenery.

Crystal, Shawn and Emma Cornell are back from their vacation. They took in the sun, water and time away from work and distractions. Good for them. Crystal has a nice tan and a wider smile from her time away.

Amelia and Tom Osborn and daughter Nicole recently attended the Loggers Convention in Booneville but some of the activities had to be canceled not because of the rain that day but the rain that had fallen some days prior to the event. All the moisture stayed in the ground making it too soggy for the heavy equipment to drive on. So — leaving early from there, they traveled to Old Forge for lunch, local crafts and just a “walkabout.” They claim the steamed clams there are the best ever and Tom downed four dozen of them. Amelia also bought some of her favorite jams and it was just a good day for all. Then neighbors Carol and Glen Howard talked them into joining the Old Ba----ds Club and off they went to attend their first barbecue for the organization in Arkville. Guess there is really no age requirement for this club because we know the Osborns are not that old but not so sure about the Howards. It was another enjoyable day for all.

Ellis and Betty Rappleyea Potter and friend were in Kingston Wednesday. Ellis had to have a follow up eye exam at the specialist after recent surgery. They enjoyed lunch at the Hudson Valley Chinese Buffet. Betty’s twin sisters, Ann and Annette, are both in the nursing home. We wish them well. Betty said she remembers how delicious “Jack’s Pizza” was and wishes she could have it again. They “finally got to meet” the Gurleys’ grandson Rob at a picnic recently. The mountain top throws a wide net.

Friends Fritzi and Lou Schmidt of Hunter are back from their week’s visit with daughter Kirstin and her husband Shawn in West Virginia. Daughter Kirstin is active duty Coast Guard and Shawn is retired from the Coast Guard. They are subscribers to our local hometown paper. Yeah, another state on our mailing list. The Schmidts came home via the Appalachian Mountains in western Pennsylvania and then into western New York, taking in Watkins Glen. As with everyone who ventures out into our beautiful country, they were taken with the beauty of it all.

Anita and Al Creazzo and Tony and Pat Bifolco are really taking care of the wildlife in the Cozy Hollow area. The bears ate all of Tony’s apples and other vegetables and the Creazzo’s fed a bear cub from their outdoor refrigerator. Seems the little guy cased the joint and figured out how to open the refrigerator. He was very discriminating, pushing aside the bottled water and soda and yogurt and went right for the fresh corn. Al was alerted to the early morning intruder when he saw a light on the porch and wondered who turned it on. It was the refrigerator light and it came on when the cub opened up the refrigerator door. Mama bear was not to be seen but Al was smart and stayed inside until the cub was finished with breakfast before going outside. Al and Anita were in the city area recently to attend the 90th birthday of his sister Chickie. Is Chickie older or younger than Al?

Steff and Steve Bambina of Winchell’s Corners, good and faithful friends of Stella Cross, said they took some time during their vacation to Lake George to visit Stella and Val’s internment site at the Saratoga National Military Cemetery. Steff said, “I told her how much I miss her and that I hope she is having a happy and wonderful time in heaven.”

Loribeth and Kipp O’Hara and Stephanie Braswell and Kory O’Hara took in their annual trip to the Travers’ in Saratoga. Haven’t heard if there were any winners.

Former resident Devon Gurley and Rose Wilson hosted their first family barbecue at their new home on Saturday to introduce baby daughter Bella to all. Older sister Adrianna played junior hostess. Family from Prattsville were great grandparents Joanne Dunphy and Bob and Ginny Gurley, and grandmother Jodi and grandfather Bob Jr. and Jen Traver, Shelly and Elliott Brainard and Dylan Braswell, and friends Dennis and Anne Hull. Other family members were brother Rob and fiancée Torie, and sisters Nadine and Christina and nephew Tanner. Also in attendance were aunts Joy and Jill and cousins Carina and Frier, as well as Rose’s family members. Devon and Rose are the newest and youngest couple on the block in Cherry Valley so the barbecue served to acquaint all the neighbors and families. There was a constant hum of conversations. Many of Devon’s co-workers were there and were giving him compliments for his work and ability. It was nice to hear that he credited his dad and grandfather for some of his training. He works for a building contractor in the Cooperstown area. Lots and lots of delicious food and more than the crowd could eat.

Pat and Tony Bifolco played hostess and host to the Creazzos and friend Karen for Sunday night dinner. The Schmidts and Gurleys enjoyed dinner out Friday evening. Steve Oliver got to have breakfast with parents Hank and Ann.

Barbara Truesdell Rickrath was around collecting stale bread for her chickens. That is their dessert. Don’t know what she is up to in her retirement but she said she was tearing down something in her garage. Maybe building a bigger henhouse.

Larry Truesdell has returned his pet woodchuck to the wild. Larry nurtured the woodchuck as a baby until it could fend on its own. It was a poignant thing but was for the best and all are now happy.

Local farmers are doing their second cuttings of hay. Did you ever notice that new mown hay only has that special aroma on the first cutting? Successive cuttings not so much. Or is it just me?

It is worth a walk on the Prattsville sidewalks to check out the hanging flower baskets. The color combinations are different on many of them and whoever picked out the assortment did a good job. Thank you and thanks to the Prattsville Highway Department for keeping them watered. Also know the Eisel Boys had something to do with this beautification. Thank you boys. They like being called boys.