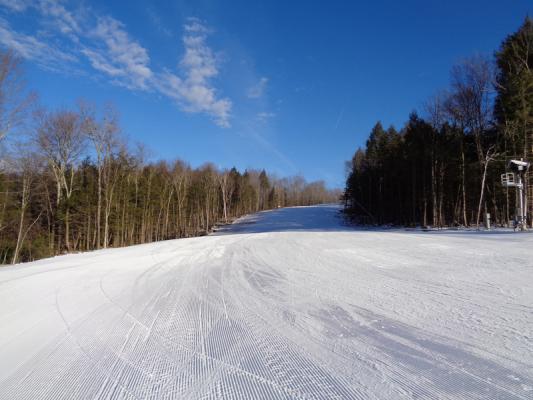 A skiing trail seen from the base of Hunter Mountain’s latest expansion Hunter North.

Authorities on Tuesday confirmed the cause of death of Brendan McCue, who died in a skiing accident at Hunter Mountain over the weekend. The Greene County Sheriff’s Office released details about the accident Tuesday.

McCue, 27, of Little Falls, was skiing a trail on Hunter North, the ski center’s most recent expansion, when he apparently lost control and skidded off the trail. McCue slammed into a rock, killing him instantly, Greene County Sheriff’s Office Lt. Adam Brainard said Tuesday.

“It was obvious on the mountain he had succumbed to his injuries,” Brainard said.

Vigilo pronounced McCue dead at 3:53 p.m. at the mountain’s first aid station and he confirmed funeral services for McCue will take place in Little Falls.

“The management and staff wish to convey their sincere condolences,” O’Connor said.

Hunter Mountain Ski Patrol was called to the scene of the accident at approximately 3:15 p.m., O’Connor said.

“This is still an ongoing investigation between the Greene County Sheriff’s Office and Hunter Mountain,” she said Tuesday.

McCue was skiing with a group of students he attended college with and he was not thought to have been wearing a helmet, Brainard said. Brainard said he did not know what level of skier McCue was.

Three of Brown-McCue's friends came forward saying he was wearing his helmet at the time of the accident, his mother, Christina Brown, said Friday.

“As fun as skiing is, the fine print of ‘ski at your own risk’ is definitely something people should think about,” Brainard said.

A toxicology test was done on McCue to determine whether alcohol or drugs played a role in the accident.

Police are awaiting the results, which could take up to several weeks. Snowy weather isn’t believed to have been a factor in the accident, Brainard said.

“There was nothing obvious,” Brainard said. “We’re still investigating the factors and circumstances.”