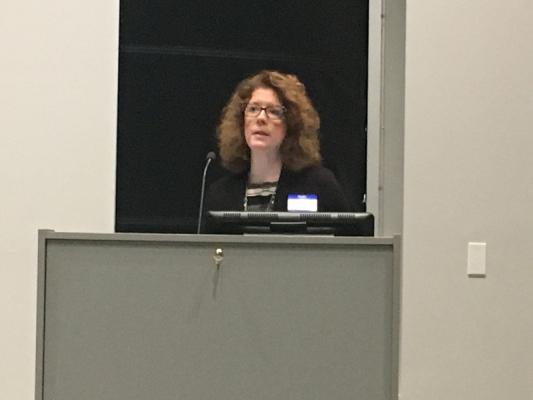 Melanie Lekocevic/Columbia-Greene Media Sandra Flach, co-founder and executive director of Ravena-based Justice for Orphans, explains Care Portal and how it can help local children and families in crisis.

RAVENA — A new high-tech tool is helping some of the nation’s neediest children, and one local child-welfare advocacy group is trying to bring it to Albany County.

Justice for Orphans, founded six years ago, is a Ravena-based nonprofit organization that advocates for the needs of orphans and foster children locally, nationally and around the globe.

Sandra Flach, the organization’s co-founder and executive director, recently spoke at the November meeting of the RCS Community Business Association, about her group and its efforts to bring the Care Portal system to Albany County.

Care Portal would build on the advocacy Justice for Orphans has been performing for local families in need of assistance by connecting them with churches that want to help.

“We engage the faith-based community in getting involved with adoption, foster care and orphan ministry, a ministry that really strengthens and supports families and children in crisis,” Flach explained.

Care Portal was launched in New York for the first time in early November, and got its start in Schenectady County, making New York the 17th state to participate. Hawaii quickly followed to become the 18th participating state.

“Care Portal is an online platform that connects local child welfare agencies with local churches to help meet the needs of children and families in crisis,” Flach said.

“We have approximately 400,000 children in foster care here in the United States,” Flach said. “Roughly a quarter of them, 100,000, are free for adoption and are waiting for a for-ever family. New York state actually has some of the highest numbers in the country, with approximately 16,000 children in foster care, and about a quarter of them are available for adoption.”

In the Capital Region, there are roughly 1,000 kids in foster care. Some are eventually re-united with their biological family and some age out of the system without ever finding their “forever family,” Flach said.

Groups like Justice for Orphans, and more recently Care Portal, enable people who want to help connect with the kids who need it.

“Our organization brings awareness to the faith-based community about these issues, and then we inspire them and encourage them in various ways to get involved,” Flach said. “We know that not everybody can become a foster parent or an adoptive parent, but there are so many ways everybody can get involved, and Care Portal is one of those ways.”

Care Portal is an online platform that connects child welfare agencies who determine the needs of families in crisis, and are able to connect with churches that want to help. Those needs can help prevent children from coming into the foster care system, it can help strengthen biological families in need of a helping hand, or help foster kids reunite with their biological families. It can also help kids who age out of the system without having found a family.

“Care Portal is a tool churches can use to really engage in this area… and meets the needs of children and families right in our communities,” Flach said.

Within the first week of the system being launched in Schenectady County, two local chil-dren were assisted.

Here’s how it works: when a child welfare case worker identifies a need, they input it into the Care Portal system, and an email is sent to participating churches that want to help meet the need.

Needs can be as simple as purchasing a car seat for a new mother who can’t afford one, but can’t take her baby home from the hospital without it.

“That baby would actually be in jeopardy of going into foster care,” Flach said. “But when the case worker enters the request into the system for a car seat, a local church can step up and say they will provide the car seat.”

One of the most common requests is for bedding, like a crib and mattress.

“This brings collaboration among the faith-based community to meet the needs of families right in their town, right in their zip code, and it is really transforming the foster care sys-tem nationwide,” Flach continued.

While the system is so far active only in Schenectady County, the plan is to eventually bring it to Albany County. Flach and a representative from Abounding Love Christian Fel-lowship, based in Faith Plaza on Route 9W, are scheduled to meet with the child welfare agency in Albany County this month to try to set it up here.

But first, the group is trying to raise $10,000 to launch Care Portal countywide.

Adrien Lewis, executive director of Care Portal, was featured in a video Flach presented to the RCS Community Business Association.

“In every community, there are churches and people who want to take action,” Lewis said. “What they need is connection and support.”

In the last three years, Flach said, more than 1,700 churches around the country have come to the aid of 31,350 children in the 18 states where Care Portal is now active.

The first family in New York state to be assisted by the program was a prospective foster family in Schenectady County that needed replacement windows for their home in order to be certified to care for two foster children who were schoolmates of their biological children. They wanted to enable the kids to remain in their home school district.

“Churches in our area were chomping at the bit to help,” Flach said.