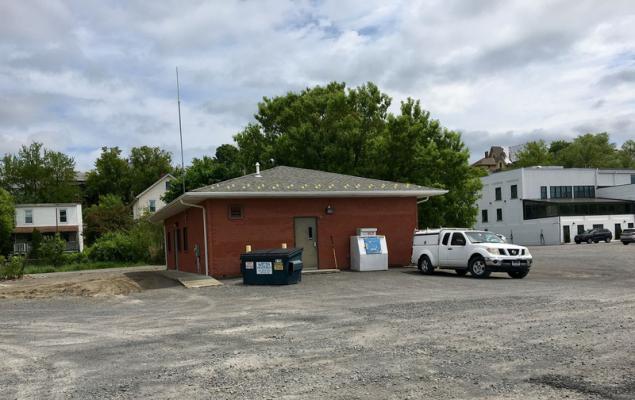 The CSX Corporation sold property to the Hudson Development Corporation, but CSX will continue use the brick building on the site for storage and maintenance purposes. Amanda Purcell/Columbia-Greene Media

HUDSON — The Hudson Development Corporation discussed closing on the CSX railroad property at the Kaz site at its meeting Tuesday and elected a new member to its board.

The meeting, held at 1 N. Front St., began with a unanimous vote by board members to appoint Kristen Keck to serve in place of John Gilstrap, who decided to step down after serving one term with the board. Keck, who is part owner of Wm. Farmer and Sons Restaurant at 20 S. Front St., and serves on the city’s Tourism Board, will serve a three-year-term on the HDC board.

Keck said she was pleased to represent Front Street, which is among the areas eyed for redevelopment under the state’s $10 million Downtown Revitalization Initiative grant, and could be impacted by the development of the Kaz site.

During an executive session, board members discussed the parcel of land of less than one acre between Front Street to the west and the Kaz warehouse property at 14-17 Montgomery St., that is expected to be acquired by the Hudson Development Corporation from the CSX Corporation.

Rasner said that although there is a contract between CSX and HDC for the purchase of the property, the sale has not been closed. There are two pieces left to the puzzle.

First, a survey must be conducted to determine easements for CSX, which still owns a small brick building on the property and will need access to its site. Second, HDC wants to conduct an environmental review of the property to determine what, if any, environmental contaminants might be left over at the former 100-year-old railroad site.

“We expect that the ground is somehow contaminated,” Rasner said. “The goal is to protect HDC and the future of Hudson from liability.”

Part of the executive session was given over to the HDC board’s attorney to explain the risks of liability and the costs of doing the environmental reviews, Rasner said.

The board’s pro-bono attorney, Steve Dunn, recommended the board go into executive session because deal had not been closed.

Among the concerns taken up in executive session was that the property ended up costing more than double the original asking price because there were two other last-minute local bidders who primarily wanted the space for parking, Rasner said.

CSX and the Hudson Development Corporation set a deadline of July 15, after which a closing date on the property will be set.

The $175,000 purchase of the property will be financed by a $200,000 loan from the Columbia Economic Development Corporation. The remainder of the loan covers the closing costs for the property, surveying and an environmental review.